The fourth round of Ranji Trophy 2018-19 is being played at various venues in the country from November 28. We bring you the  results of the second and third rounds of  the tournament in the following tables

She has accused Powar of discrimination and bias in a letter addressed to the BCCI. She has admitted that she was baffled at the decision to leave her out of the semi-final which India lost to England and pointed out that Powar had issues with her ever since the team landed in the Caribbean islands.

“My issues with the coach started immediately as we landed in the West Indies. At first, there were small signs that his behaviour towards me was unfair and discriminatory but I did not bother much about it. Right from the Sri Lanka tour to Australia A matches I opened the innings and in the World Cup warm-up games too I had done the same. One day before the game after I came out of the nets, he walked up to me and informed me that he wanted me to bat in the middle order as we needed depth in the middle order against New Zealand. For instance, walking off if I am sitting anywhere around, watching in the nets when others bat but choosing to walk away when I am batting in nets if I try to go up to him to talk to start looking into his phone and keep walking. It was embarrassing and very evident to everyone that I was being humiliated,” she wrote in a letter to BCCI.

The decision to drop Mithali in the semis created a lot of controversies as many fans pointed fingers at the team management for taking such a huge decision and Mithali’s manager Aneesha Gupta went a step further and termed skipper Harmanpreet Kaur “manipulative, lying, immature, undeserving captain” on Twitter for dropping her client.

Mithali cleared the air surrounding Kaur as she affirmed that her relationship with the right-hander is still intact and Kaur had no other option but to obey the coach’s order ahead of the game.

“I would also like to point out that I have nothing against the T20 captain Harmanpreet Kaur except for the fact that her call to support the decision of the coach to leave me out of the eleven was baffling and hurtful. I wanted to win the World Cup for my country and it hurts me because we lost a golden opportunity,” Mithali addressed in the letter which was reported by India Today.

New Delhi, Nov 28 (PTI) Mithali Raj threatened to retire midway through the World T20 after being denied the opening slot, Indian women’s cricket coach Ramesh Powar has alleged in his report to the BCCI which also accuses the senior player of throwing tantrums and creating chaos.

In the report, which is in possession of PTI, Powar presented his version of the events that led to the breakdown of his equation with the seasoned batter. Powar’s report comes a day after the Mithali alleged that the former spinner was out to destroy her and humiliated her during the tournament in the West Indies.

Powar’s 10-page tour report is almost entirely focussed on Mithali, taking up nearly five pages in all. He met BCCI CEO Rahul Johri and GM (Cricket Operations) Saba Karim at the Board headquarters in Mumbai on Wednesday to submit it.

“I hope Mithali stops blackmailing, pressurizing coaches and putting her interest first then the team,” Powar said while summarising Mithali’s performance on the tour.

“Before Pakistan match, video analyst Pushkar Sawant came to my room and said that fielding coach Biju George has conveyed to him that Mithali is upset with the batting order and packed her bags with the announcement of retirement in the morning,” Powar wrote in his report.

“I was saddened by her attitude and it gave me an impression that Mithali Raj comes first and then India. She threw a lot of tantrums and created a lot of chaos,” he stated.

Mithali’s controversial dropping from the semifinal against England, which India lost by eight wickets, triggered a storm and the 35-year-old has said that the axing left her in tears.

Responding to Mithali’s charge that he asked her to not even show up at the ground for the league match against Australia, Powar said he merely asked her to rest at the hotel to recover from a niggle.

“She couldn’t understand her role and adapt to the team plan and played for her personal milestones,” the former Mumbai and India off-spinner wrote.

Powar also wrote that she couldn’t field outside the inner circle due to fitness issues and that her attitude affected the team’s preparations for the semifinals.

“Her irresponsible behavior took my time away as I was supposed to speak with few players regarding preparations of all important semifinal match, which could not happen,” he alleged.

On Tuesday, Raj had also accused Committee of Administrators member Diana Edulji of bias. The ODI captain stated that Edulji used her position against her and made her feel vulnerable.

Edulji has not yet reacted to the allegations made by Raj. The 40-year-old Powar’s interim tenure comes to an end on Friday.

Even though he will be free to apply for the post when fresh applications are invited, there is little chance that he will be retained as his player management skills have come under the scanner due to this incident

V Krishnamurthy of India shared the record for most catches excluding wicketkeepers in an ICC Women’s WT20 edition with C Henry of West Indies. Both the fields women pouched six catches in the just concluded edition. The previous record was five catches. JE Cameron of Australia in 2012,  JE Gunn of England in 2012 and LS Greenway of England in 2014 were the three fields women who had pouched five catches. Nida Dar of Pakistan pouched five catches in the just concluded 2018 edition.

V Krishnamurthy of India pouched four catches against Australia at Providence on 17.11.18 to own the record for most catches in an innings by a fields woman in an edition of ICC Women’s World T20. The previous record was three  catches and  was shared by five fields women as detailed in the following table

H Kaur of India scored 103 against New Zealand at Providence on 09.11.18 to become the third batswoman to score a century in ICC Women’s World T20. She became the first Indian batswoman to achieve the feat. All the three centuries are listed below

H Kaur of India scored 103 against New Zealand at Providence on 09.11.18 to become the second captain to score a century in ICC Women’s World T20. She became the first Indian captain to achieve the feat. Both the three centuries are listed below

JI Rodrigues and H Kaur of India added 134 runs for the fourth wicket against New Zealand at Providence on 09 Nov 18 to provide the 13th occasion of batswomen posting a three figure partnership in ICC Women’s World T20.It also represents the second best partnership in the tournament for any wicket.

New Zealand and South Africa lost two home test series by losing all the three tests. All such occasions are tabulated below 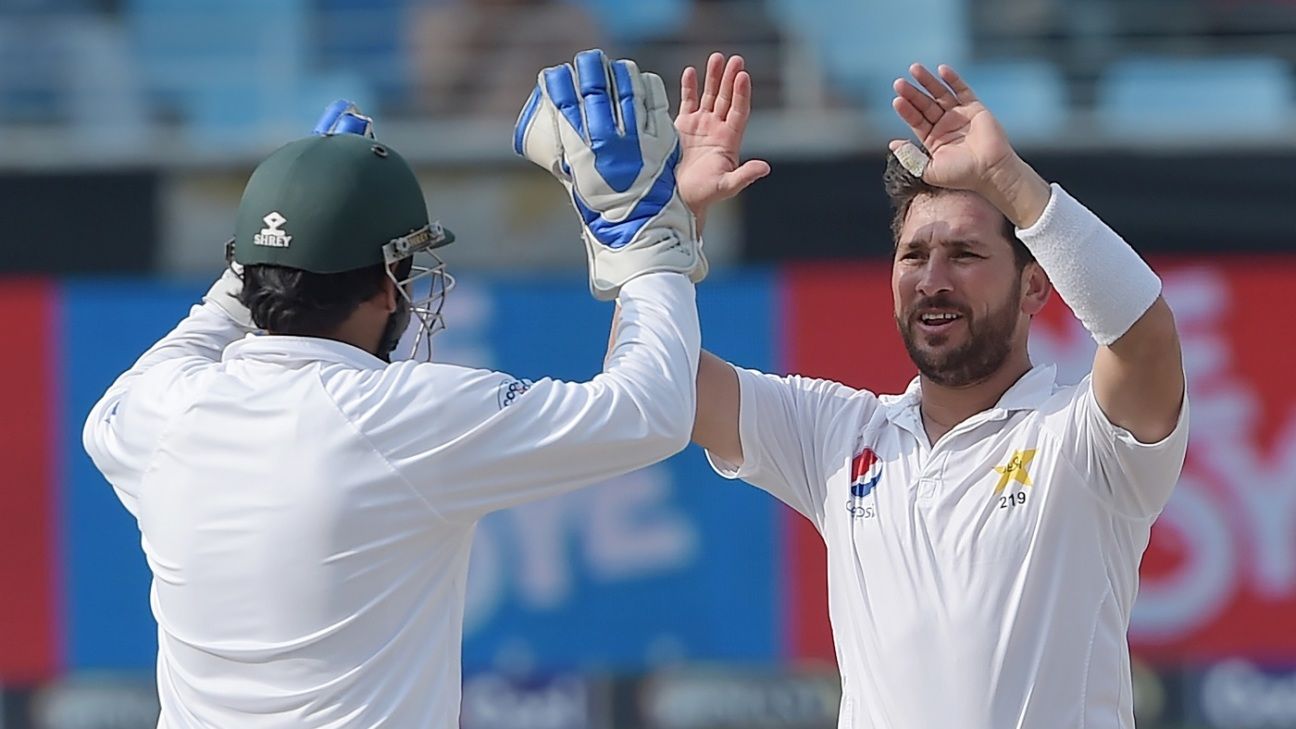 Yasir Shah of Pakistan captured 14 for 184 in the just concluded test against New Zealand at Dubai-DSC with 8 for 41 in the first innings and 6 for 143 in the second innings. His feat of 14 wickets in a test with five plus wicket haul in each innings provides the 23rd occasion of a bowler capturing 14 plus wickets in a test with five-plus wicket hauls in each innings of a test. All such occasions are tabulated below

Yasir Shah of Pakistan captured 14 for 184 in the just concluded test against New Zealand at Dubai-DSC with 8 for 41 in the first innings and 6 for 143 in the second innings. His feat of 14 wickets in a test with five-plus wicket haul in each innings provides the 13th occasion of a spin bowler capturing 14 plus wickets in a test with five-plus wicket hauls in each innings of a test. All such occasions are tabulated below